UN Security Council to vote on resolution on Syria’s Aleppo 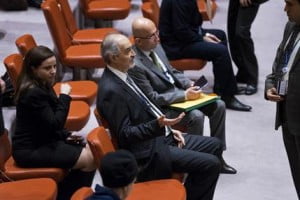 UNITED NATIONS (AP) – The U.N. Security Council is expected to vote on a resolution aimed at immediately deploying U.N. monitors to eastern Aleppo, a move France says will be critical to prevent “mass atrocities” by Syrian forces, and especially militias, who captured the rebel stronghold.
The resolution, due to be put to a vote on Monday, comes as thousands more trapped Aleppo civilians and rebels await evacuation in freezing temperatures in the rebel enclave.
The text calls for the United Nations and other institutions to monitor the evacuations and demands that U.N. chief Ban Ki-moon urgently consult all parties on the immediate deployment of the monitors.
France and Russia, who submitted rival draft resolutions, struck a compromise text after more than three hours of closed-door consultations by the U.N. Security Council on Sunday.