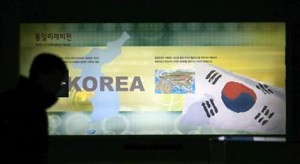 SEOUL, South Korea (AP) – North Korea’s nuclear test has provoked global outrage, a push for sanctions, even fear. But Kim Jong Un’s decision to conduct it has also handed a gift of sorts to his rival in the South.
In an instant, Wednesday’s explosion shifted the focus on the presidency of Park Geun-hye, who has faced several mass protests condemning her leadership in recent weeks.
Park’s swift, hard-line response, including a return of cross-border propaganda broadcasts that Pyongyang loathes, has, for the time being, overshadowed criticism over her leadership style, her alleged abuse of workers’ rights and her purported submission to Tokyo in a deal meant to end a dispute over Japan’s wartime sexual enslavement of Korean women.
Park has temporarily stopped a slide in popularity by doing something she has proven herself adept at: Standing tall in the face of what Seoul sees as a provocation from its northern rival. A survey showed her approval rating rose slightly last week, for the first time in five weeks.
While the boost is likely temporary, the timing of the nuclear test may help Park and her ruling party. Crucial parliamentary elections loom in April.
The test is “immediately quieting down” the most contentious complaints against Park, said Yoon Tae-Ryong, a professor at Seoul’s Konkuk University.
“Some members of the ruling party must be grinning inside.”
Shortly after the North’s test, Park put her front-line troops on their highest alert, reportedly moved missiles, artillery and other weapons closer to the border, partially banned South Koreans from a jointly run factory park in the North and allowed huge green speakers along the border to begin cranking out South Korean K-pop songs and criticism of the North’s leadership.
She could have done more to punish the North, by slapping them with bilateral punitive measures and ending the South’s participation in the factory park, which is a rare cash cow for the impoverished, widely shunned North. The park, however, is also the last major inter-Korean project from an earlier era of rapprochement.
She’s attempting to walk a delicate line: To show South Korea’s intense displeasure without killing the possibility of drawing the North into future diplomacy that could settle the neighbors’ many differences.
A military clash is also a worry. Pyongyang posts a large part of its 1.2 million military and a huge array of weapons along the Korean border, within easy striking range of the South Korean capital, Seoul, and its 10 million residents.
The North views the restart of the propaganda broadcasts and their criticism of its authoritarian leadership as tantamount to war. Seoul says the broadcasts led the North to fire artillery across the border the last time they happened, in August. British Foreign Secretary Philip Hammond on Friday publicly urged Seoul to refrain from the broadcasts.
North Korea, however, has done little to respond to the broadcasts this time, perhaps because Pyongyang is too focused on celebrating its nuclear test for internal propaganda purposes. The most tangible effect of the South’s retaliation so far is that it has helped Park change the conversation back home.
Though the president has a strong base of conservative supporters, thousands of opponents took to the streets on several occasions before the nuclear test to criticize her policies and what they saw as her attacks on personal and political freedoms.
There’s resistance to a new requirement for schools to use only state-issued history textbooks starting in 2017, which critics call an attempt to whitewash past dictatorships – including that of Park’s father, Park Chung-hee, who ruled South Korea in the 1960s and 1970s. The country’s military dictatorship ended only in the late 1980s and the divide between left and right remains deep.
Park has also received massive public criticism for a botched rescue operation during a ferry disaster in 2014 that killed more than 300, mostly schoolchildren, and for the handling of a MERS virus outbreak last year that killed 38.
Most recently, the nuclear test tamped down anger over an “irreversible” settlement last month between Japan and South Korea of a decades-long standoff over Korean women forced into sexual slavery by Japan’s World War II military.
All those controversies may have been muted by the nuclear test, but none are going away.
“Conservatives have mustered support temporarily because of this external shock,” Jang Seung-jin, a professor at Seoul’s Kookmin University, said of the nuclear test. “When the nuclear news calms down, I think her approval rating will dip back to where it was.”