Mamata Bannerjee backs GST Bill; will she be the catalyst behind Modi govt’s reform push? 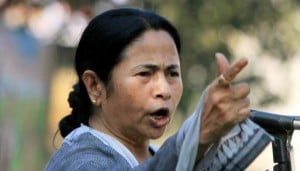 New Delhi: With Mamata Bannerjee set to assume her chair for the second term as West Bengal Chief Minister, the ruling BJP might see a revival of hope for the passage of the Goods and Services Tax (GST) Bill –that has been pending for a very long time.
On being asked about TMC’s equation with BJP, Bannerjee said, “We have ideological differences with it but we will always support it on issues that are beneficial to the people.”
She also said TMC will support GST Bill in Parliament as promised earlier.
The TMC is all set to retain power as the party was leading in 214 of 294 seats. The Left and Congress were ahead in 73 seats while BJP in seven.
Notably, Finance Minister Arun Jaitley had a few days ago expressed hoped that the GST Bill will be approved in the monsoon session of Parliament and said the government will not relent on crackdown against corruption to win Congress backing.
“I am reasonably confident because… Every political party, including Congress, favours the GST. In fact, Congress should have had the vision to support it more aggressively because they could claim the original authorship of the idea,” Jaitley said when asked if he was confident of passing the Bill in the monsoon session.
The Goods and Services Tax (GST) Bill, which has been approved by the Lok Sabha, is pending in the Rajya Sabha because of stiff resistance by the Congress, the largest party in the House, over a few proposals.