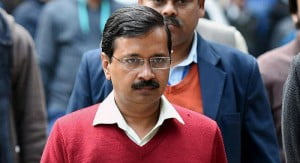 New Delhi: Delhi Chief Minister Arvind Kejriwal on Thursday wrote a letter to Delhi University Vice Chancellor Yogesh Tyagi and urged him to make public Prime Minister Narendra Modi`s BA degree.
In the letter, Kejriwal said: “It will be better if you put on the university website all the documents related to the Prime Minister`s degree.”
The Aam Aadmi Party (AAP) leader also referred to Modi`s successive election affidavits which stated that he had a Bachelor of Arts degree from Delhi University.
“The people of this country have a right to know how educated their Prime Minister is.”
On Wednesday, Kejriwal alleged that Modi didn`t have a BA degree from Delhi University.
He said there were no records in the university and the purported degree of Modi published by some newspapers was forged.
Modi`s election affidavit in 2014 claimed he had both undergraduate and postgraduate degrees. According to the affidavit, he completed a distance education course from the Delhi University in 1978 in Political Science.
Kejriwal said in his letter to Tyagi that if Modi didn`t have a BA degree, then he could not be having an MA degree too.
“Gujarat University says he (Modi) has done MA from there. But if he hasn`t even done his BA, how did he get admission in MA? It raises doubts that his MA degree is also forged. It is a very serious matter.”
On Wednesday, three AAP leaders alleged that the Delhi University refused to share with them details regarding Modi`s BA degree and told them to approach the Prime Minister`s Office (PMO) instead.
The Central Information Commission (CIC) had on April 29 directed the universities of Delhi and Gujarat to respond to the RTI application regarding Modi`s educational qualifications.
Earlier, the Delhi University declined to give information related to Modi`s BA degree despite RTI requests.
The university cited its inability to get the information without a roll number as the reason for the denial.