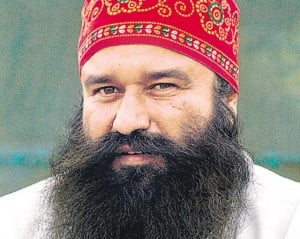 Final arguments in the case of rape registered against Dera Sacha Sauda chief Gurmeet Ram Rahim Singh will be heard again in the Central Bureau of Investigation (CBI) special court at Panchkula as the Punjab and Haryana high court had transferred CBI special judge RK Yadav just before the pronouncement of the final order.
Yadav left the charge on April 11. It is the oldest rape case pending at the Panchkula district courts, which involved two victims. The case has been dragging on for around 14 years now, as the FIR was registered in 2002.
For the past close to a year, no hearing could take place in the trial court as the matter was pending before the high court over the examination of specimen handwriting and signatures of one of the two victims before forensic labs other than the Central Forensic Science Laboratory (CFSL), Chandigarh.
Gurmeet Ram Rahim Singh told the high court that specimens of handwriting should have been sent to the Forensic Science Laboratory, Madhuban, or CFSL, CBI, New Delhi. While dismissing the application on March 31, justice Anita Chaudhary observed: “In my considered view, the attempt by the petitioner (Gurmeet Ram Rahim Singh) is only to delay the trial in every possible way and nothing more.”
The high court dismissed another application of Ram Rahim on March 31 for calling the victim again to give more handwriting samples. The court said, “The prosecutrix (victim) cannot be summoned again and again on the asking of the accused. It is often stated that when a women is raped she undergoes two crises, the rape and subsequent trial. First wounds her dignity, the second not less potent forces her to relive the traumatic experience and brings her in the glare of publicity with the paraphernalia of criminal justice system focused on her.”
The high court also dismissed third application of Ram Rahim on March 31 where he wanted to tender some documents despite closure of defence evidence.
Before that, the case remained tied up in the high court from 2010 to 2013, as the victim’s father had challenged the trial court’s order for calling her to give her specimen writing samples. The application was dismissed.
“The matter has already been delayed as the accused had been filing a number of applications before the trial court and then revision applications before the high court. The final arguments will have to be started again now,” said CBI counsel HPS Verma.
“Earlier, only half of defence arguments were completed. The next date of hearing is May 7. With the change of judge, the arguments have to start again,” said Vishal Garg Narwana, counsel for the dera chief.