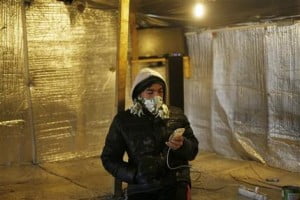 CALAIS, France (AP) – The Latest on the migrant influx into Europe (all times local):
12:35 p.m.
The head of Europe’s border control agency says it’s proving near-impossible to return to Turkey migrants who arrive in Greece but have no case for asylum in the European Union.
Frontex chief Fabrice Leggeri said in Berlin Tuesday that newcomers who don’t meet requirements for protection and are considered economic migrants are supposed to leave Greece within a month. Since the vast majority arrive on boats from Turkey, that means they should return to Turkey.
But Leggeri said “practically almost no migrants can be returned to Turkey.” He suggested that if no country is taking the unwanted economic migrants it’s likely they’ll all remain in Greece.
EU leaders are looking for ways to persuade Ankara to deliver on a pledge to crack down on migrants trying to cross into Greece.
12:30 p.m.
A key migration watcher says more than 110,000 people have crossed the Mediterranean to Greece and Italy this year – about four months faster than that milestone was reached in a record-setting 2015.
The International Organization for Migration says more than 102,500 people crossed into Greece and more than 7,500 to Italy through Monday. IOM figures show that last year, that number of crossings wasn’t reached before June. By year-end, more than 1 million people had crossed.
Nearly half of those arriving in Greece this year were Syrians, and one-quarter were Afghans.
Separately Tuesday, the U.N. refugee agency UNHCR said a study found 94 percent of Syrians and 71 percent of Afghans who arrived in Greece in January cited conflict and violence at home as their main reasons for traveling there.
9:40 a.m.
People fleeing conflict and poverty in Africa, the Mideast and Asia are facing an evening deadline to move out of a camp in the French port of Calais that has become a flashpoint in Europe’s migrant crisis.
Authorities, arguing that the slum-like site presents sanitary risks, warned camp residents last week that they have until 8 p.m. (1900 GMT) Tuesday to leave.
A decision is expected Tuesday in a last-ditch effort by charity groups to delay the evacuation.
Officials estimate 800 to 1,000 currently live there, but humanitarian groups contend the figure is more than 3,000.
Regional administration head Fabienne Buccio said on Europe-1 radio Tuesday that the expulsion order doesn’t mean authorities will use force to evacuate the site. Interior Minister Bernard Cazeneuve insisted the evacuation would be “progressive.”
9:15 a.m.
Police have removed hundreds of migrants from a camp at Greece’s border with Macedonia following a protest that halted freight rail services to other Balkan countries.
Authorities said the mostly Afghan migrants were being put on buses bound for Athens, in the south of the country, after the police operation started early Tuesday. Journalists were not allowed to approach the area.
Macedonia at the weekend began stopping Afghan migrants at the border, and slowing the rate at which asylum seekers from Syria and Iraq were allowed to cross the border – leaving thousands stranded in Greece, where an average of 4,000 migrants and refugees each day.
Greek has strongly criticized Austria’s decision last week to cap the daily number of asylum applications and migrants crossing the country.