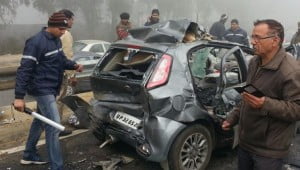 Four members of a family hailing from Lucknow in Uttar Pradesh were killed and another with them was critically injured when the car they were travelling in rammed into a truck on National Highway-1 at Nilokheri in Karnal district of Haryana around 6am on Wednesday. It was a pile-up caused by fog; in all around 15 people were injured when 25 vehicles collided with each other.
Area station house officer (SHO) Brish Bhan said the family was on way to Amritsar for the engagement of one Harinder Singh, 28, who was among those killed.
Other victims have been identified as Harinder’s uncle Prabhjot Singh, 50; grandmother Gurpal Kaur, 75; and family’s domestic help Aditi, 23. Harinder’s maternal aunt, who was also in the car, was hospitalised in a critical condition.
Other family members, including Harinder’s father Sarabjit Singh, was in another car, Bhan said, adding that the all family had reached Noida Tuesday night from where they left for Amristsar in the wee hours on Wednesday for the engagement ceremony.
According to the police, the accident took place around 6.30am when the truck moving ahead of their car on the Nilokheri flyover suddenly applied brakes and the car crashed into it.

Free education for all up…