Chinese visit temples, fairs to ring in Year of the Monkey 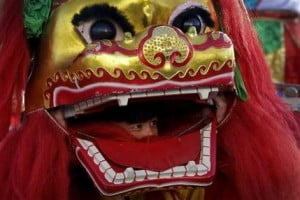 BEIJING (AP) – Chinese flocked to temples and fairs to pray for good health and fortune on Monday, the first day of the Lunar New Year.
In Beijing, hundreds of thousands of people visited traditional fairs held in parks, as well as Buddhist and Taoist temples offering singing and dance performances and open-air markets selling handicrafts.
Monday marks the first day of the Year of the Monkey – the ninth animal on the Chinese zodiac calendar.
The weeklong holiday, known as the Spring Festival in China, is focused on family reunion and is a time when students and migrant workers return to their hometowns. It is the country’s most important holiday, equivalent to Christmas for many in the West.
Travel agent Meng Su was lining up to burn incense at the Tibetan Buddhist Lama Temple in central Beijing, which is regarded as a popular tradition that brings good luck to those praying.
“Chinese people revere the power of nature and believe in gods, so we hope to express our blessings and that the gods can hear us,” said Meng, 39. “It’s also a way for us to find some comfort.”
Another Beijing resident, Yan Xiaying, 29, said her mother had a clear target as the pair visited the temple.
“I guess my mother hopes that I get married soon,” Yan said, with her mother agreeing.